What are the key protection devices in an electrical installation?

As all electrical installations are subject to incidents (overcurrents, short circuits, etc.) which pose a risk to people, appliances and buildings/houses, it is essential to implement protective solutions to avoid any danger (electric shock, fire, etc). 6 key devices enable you to ensure optimum safety for people and appliances.

Device placed at the supply end of the distribution board in low-voltage installations, this is used to make, hold and break the current. In the opening position (contacts open), it performs the isolation function which ensures there is no electric current in the downstream installation.

Device placed at the supply end of the distribution board in high-power installations (commercial or industrial), this is used to break the current and protects installations against overloads and short-circuits. If a fault is detected, it trips and cuts the power to the circuit concerned.

Device installed at the outgoing end of each circuit in the distribution board, this cuts the current immediately in the event of a short-circuit or overcurrent. It therefore prevents temperature rises and the risk of fire. A switch handle is used to reset it after the fault has been eliminated.

Device installed in the distribution board, this protects equipment in the installation by limiting voltage surges of atmospheric origin. It discharges a significant amount of the energy generated by lightning waves to earth, thus limiting over-voltages at the equipment terminals. It is mandatory in regions with a high lightning strike density if the building is supplied by an overhead network, and anywhere the building is equipped with a lightning conductor.

Device installed in the distribution board upstream of the electrical circuits, this detects current leaks due to insulation faults and prevents any risk of electrocution by immediately cutting the power to the circuit concerned. A switch handle is used to reset it after the fault has been eliminated.

Device installed at the outgoing end of the electrical circuits in the distribution board, this performs the same functions as the RCCB and, in addition, those of the MCB with short-circuit and overcurrent protection. It has the advantage of solely cutting off the power to the only circuit that has a residual current fault and maintaining its supply if there is a fault on another circuit.

WHERE TO INSTALL THEM?

Here is an implementation example of key electrical protection devices in a DIN-rail mounting system. 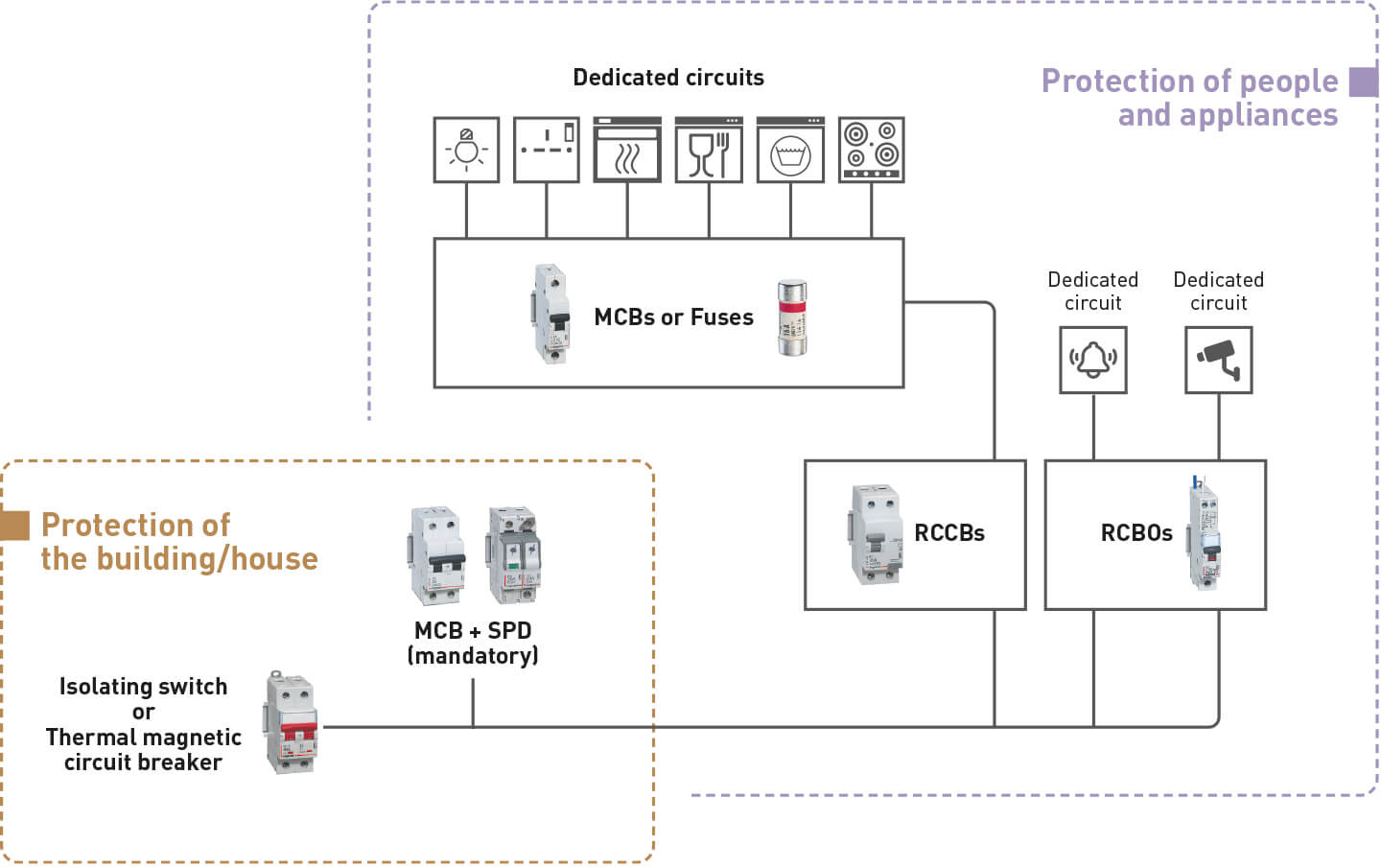 Surge protective devices can be installed upstream in the main distribution board. It is mandatory:

- to install at least one Type T1+T2 Iimp 12.5 kA Surge Protective Device if there is an external lightning protection system on the building